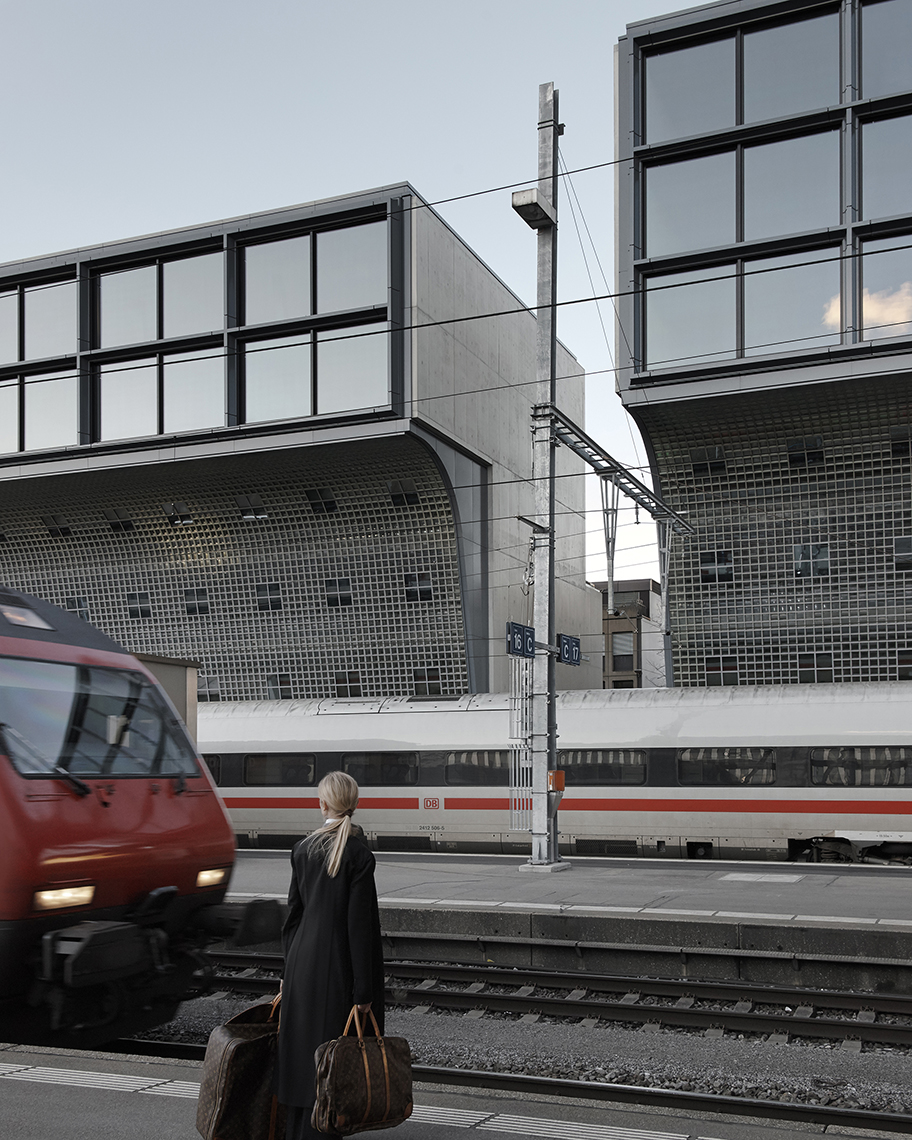 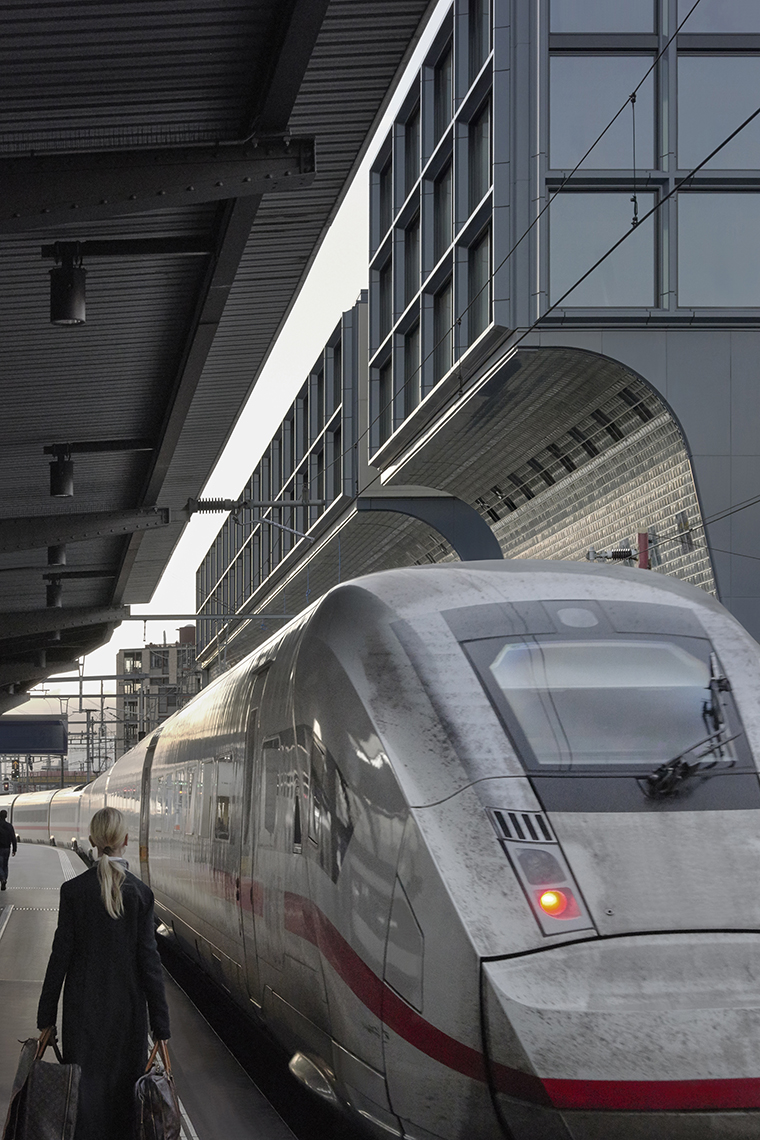 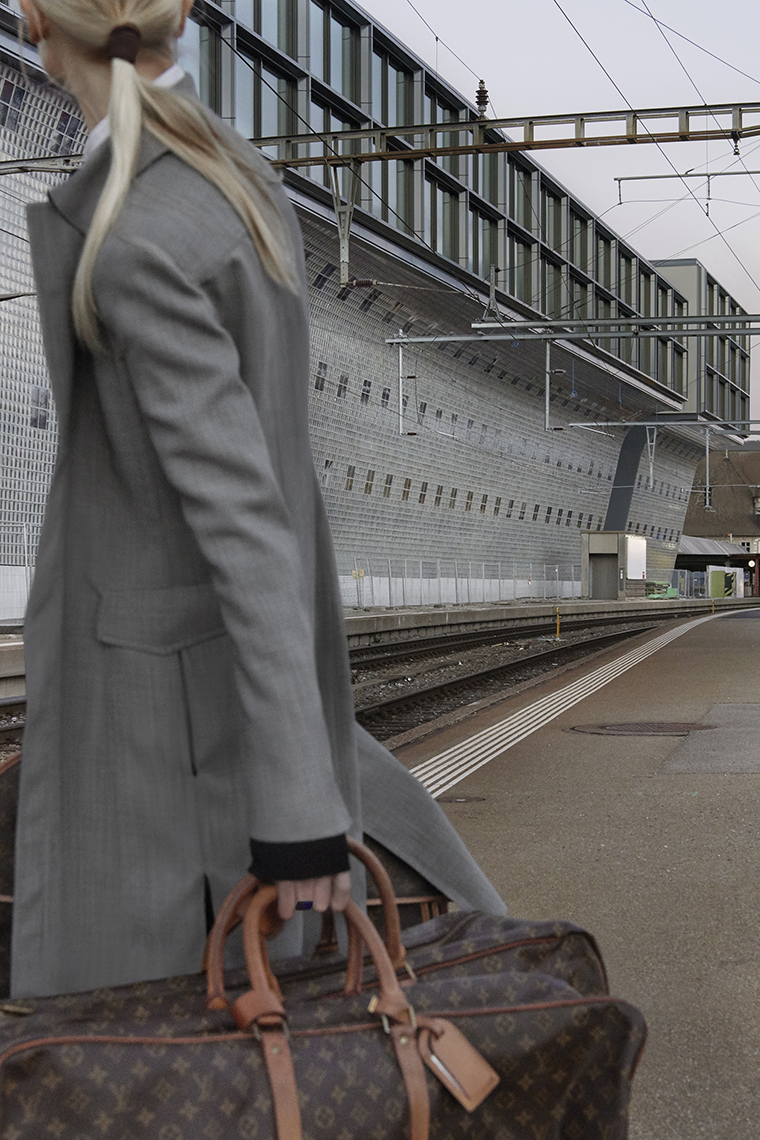 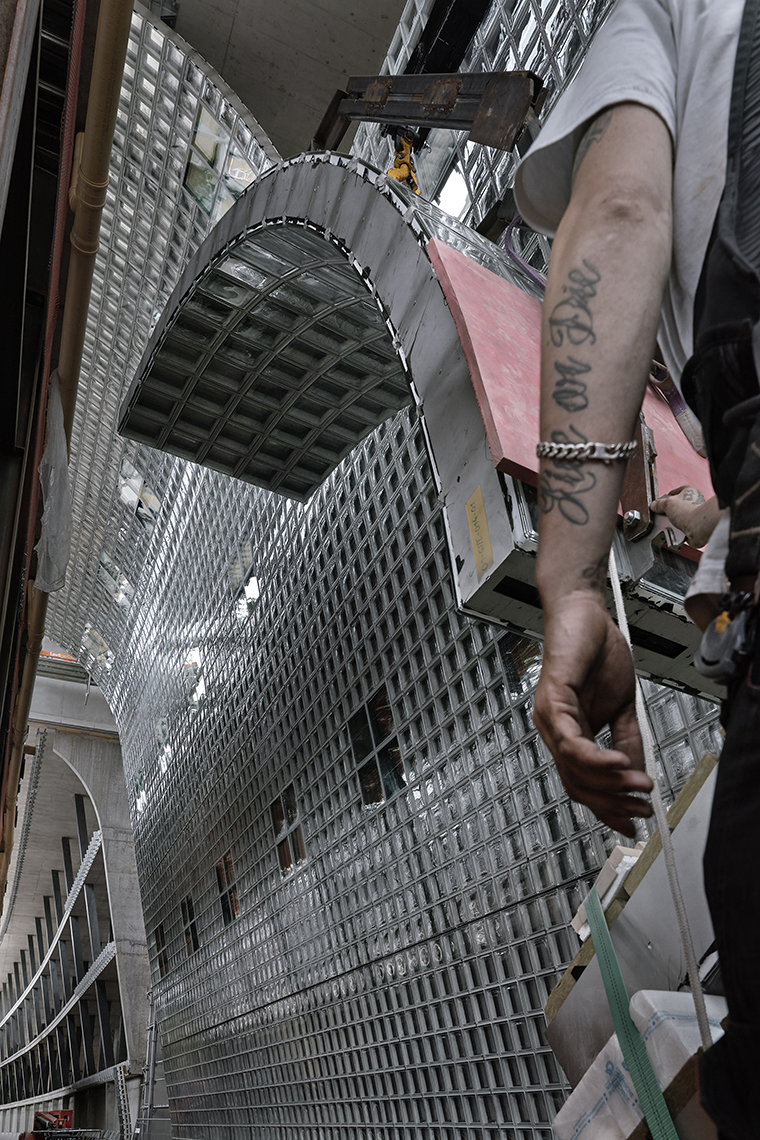 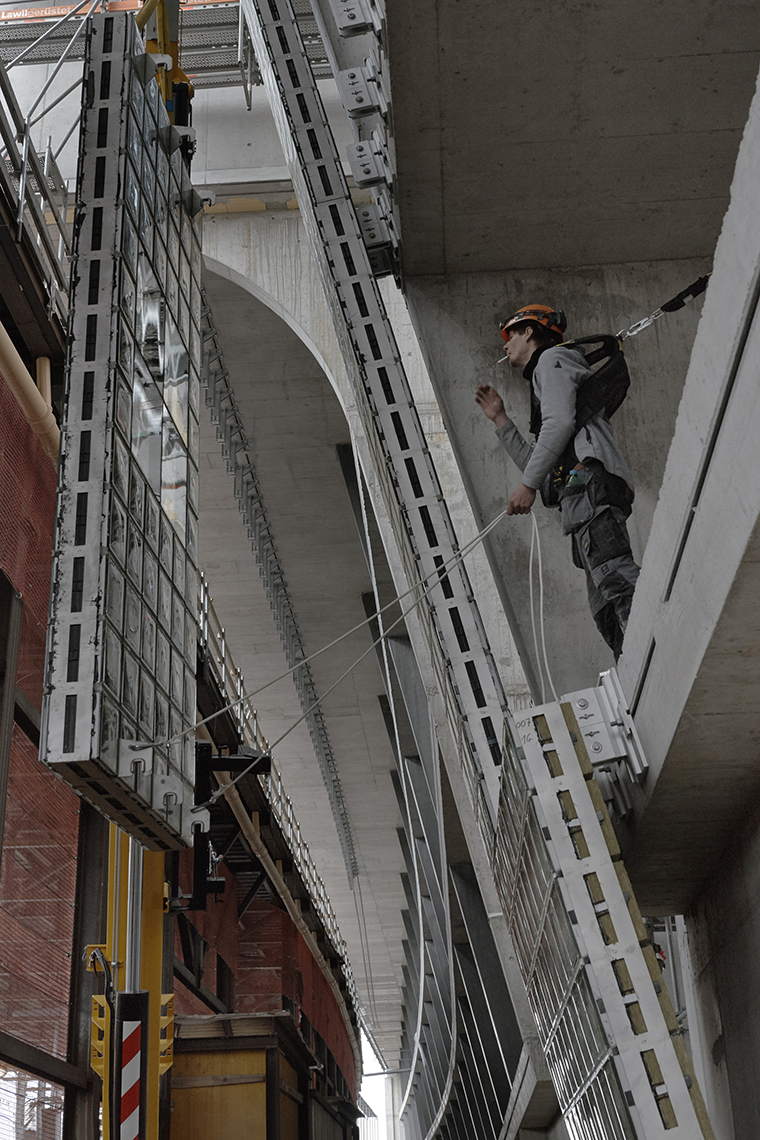 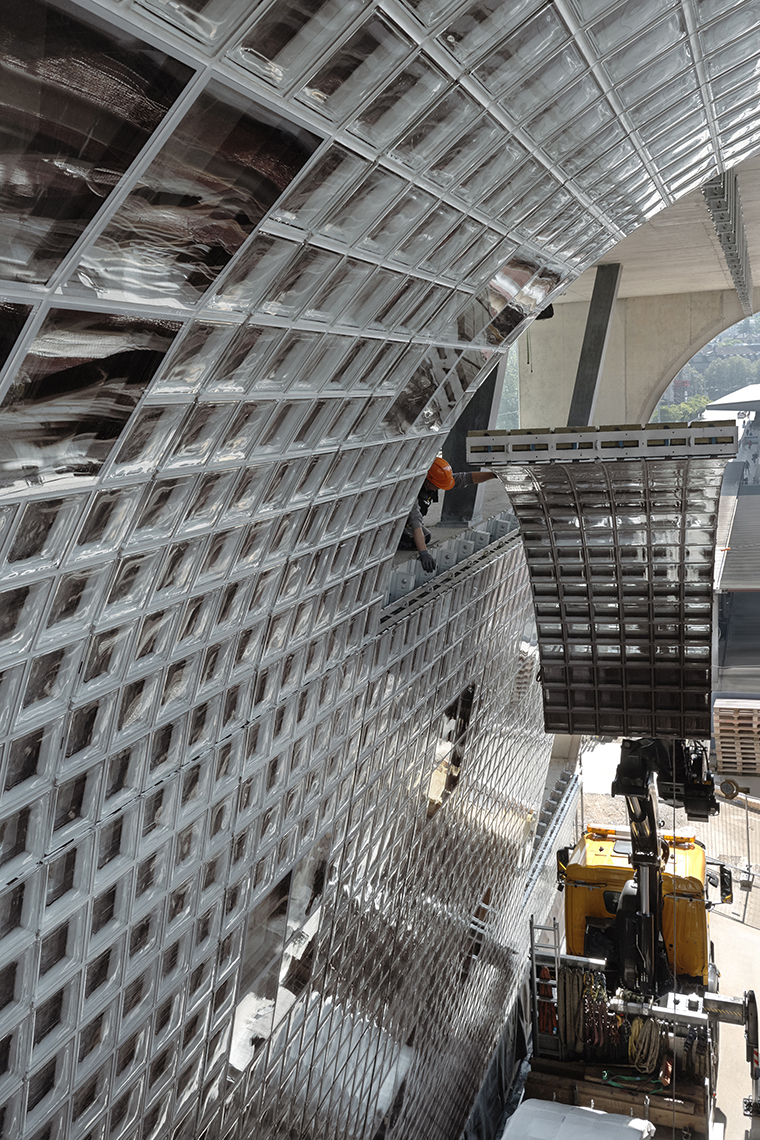 Traveller, if you come to Zurich …

We recommend all rail passengers approaching Zurich Main Station on above-ground tracks to secure a window seat on the left side of the train. Before entering the station, attentive observers can now expect a special architectural experience on the north side of the track field – the Gleisarena. The service building in front of the new area development along the Zollstrasse with its remarkable facade design sets strong design accents. The 1,500 m2 glass block façade is particularly eye-catching. Developed in analogy to glacier topography, the building envelope with its biaxial curvature arches impressively over the platform.
In the 1960s and 1970s, glass block walls were considered modern elements in façade design and were frequently used. Later, they were rarely used anymore due to their disadvantageous structural-physical properties. The planning team consisting of the architects Made in, the façade planners from Lüchinger+Meyer and the general contractor Porr Suisse helped the glass blocks to a small renaissance. The development of an innovative element façade made of glass blocks with properties corresponding to the Minergie-P-Eco energy standard of the building was successful.

Due to the small-format glass blocks and the given construction depth, the façade construction spans a close-meshed, spatial network of joints. In terms of building physics, this is used for geometric self-shading. In combination with the low g-values of the glass blocks, it was therefore possible to dispense with external shading. The glass blocks are configured as hybrid elements consisting of half shells in cast glass and a conventional insulating glass in the core. The supporting structure of the prefabricated, elemental glass block facade is formed in the joint network. During the planning process, the originally planned stainless steel reinforcement of the mineral joints was developed into a stainless-steel sheet metal grid, which is integrated into the joints. The individual glass blocks are mechanically secured but can be replaced individually.
The visually small-scale arched façade is contrasted with the large-format element façade of the rest of the building. Its accentuated tectonics is created by the design of the contour profiles with clear intersections and crossings. On the outside, the supporting structure is traced with contour profiles, which accommodate the blind boxes and the lateral guides of the shading system. 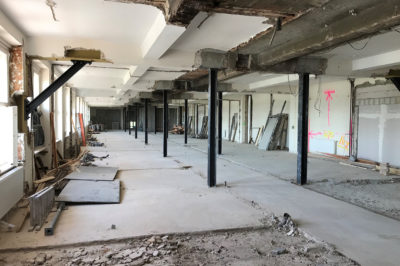 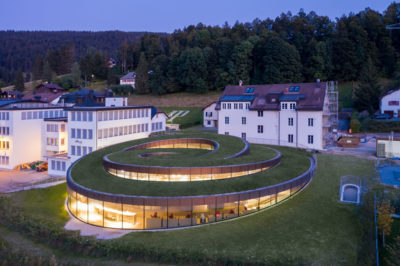 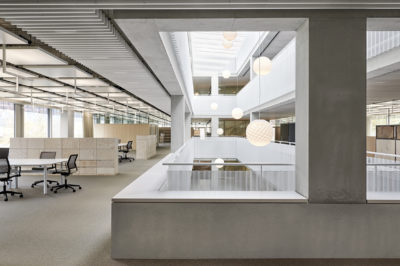 The return to the new office

Life by the river