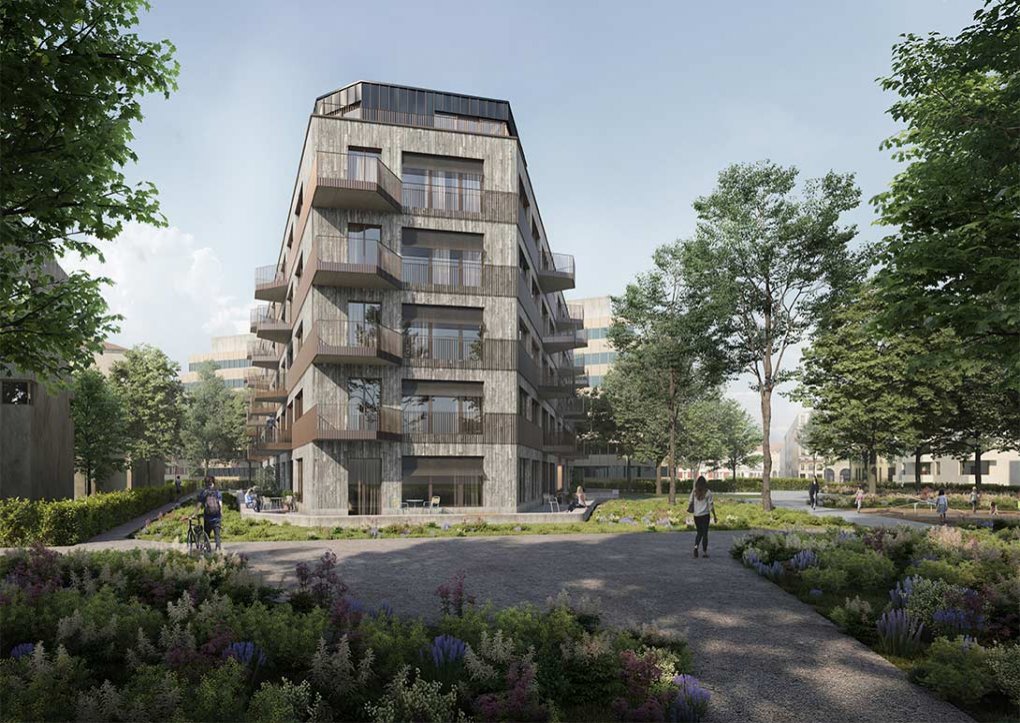 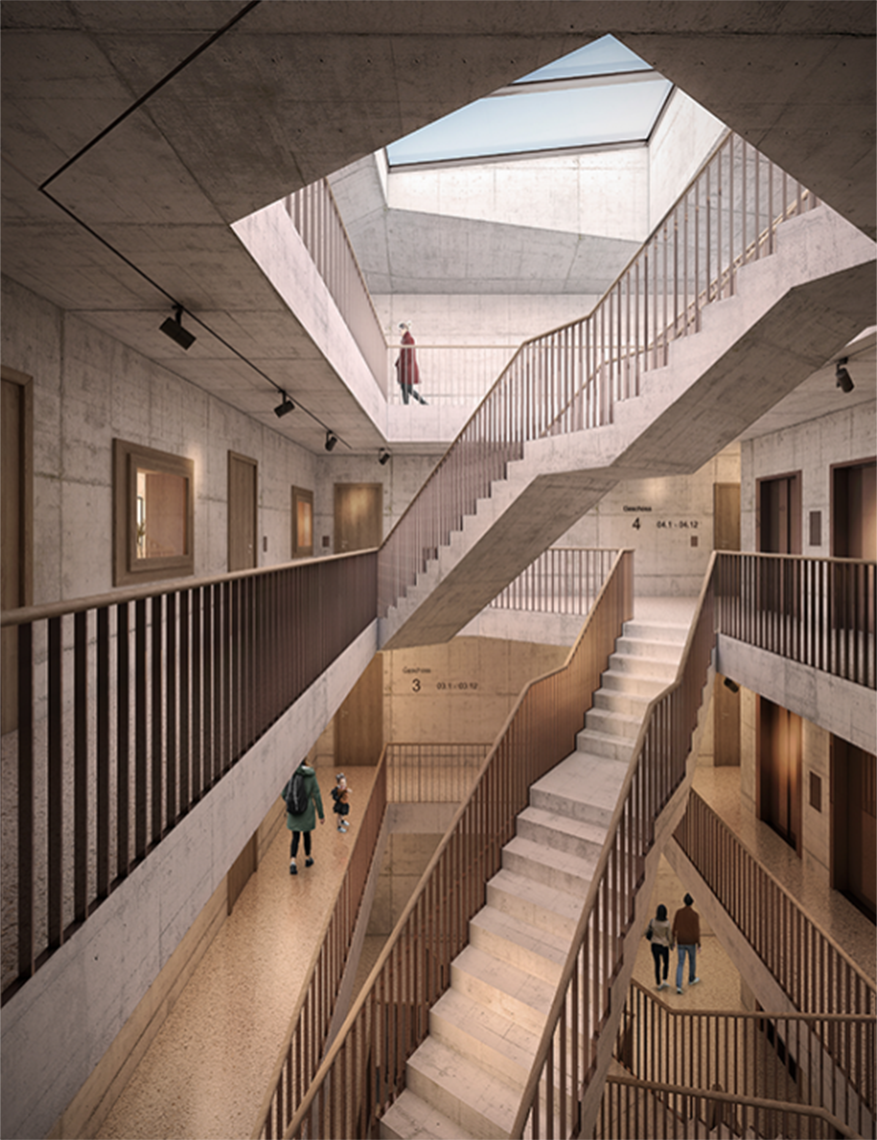 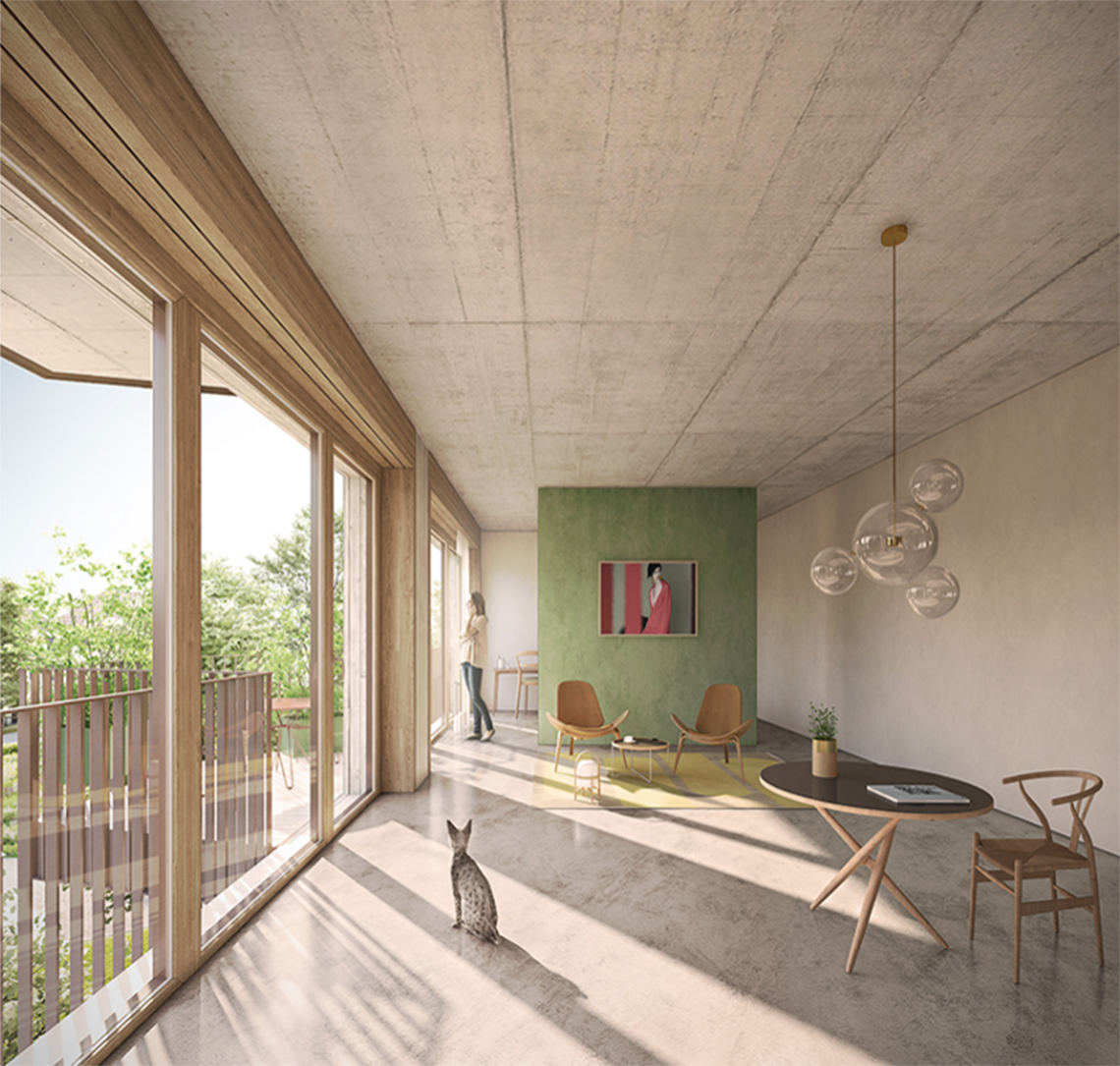 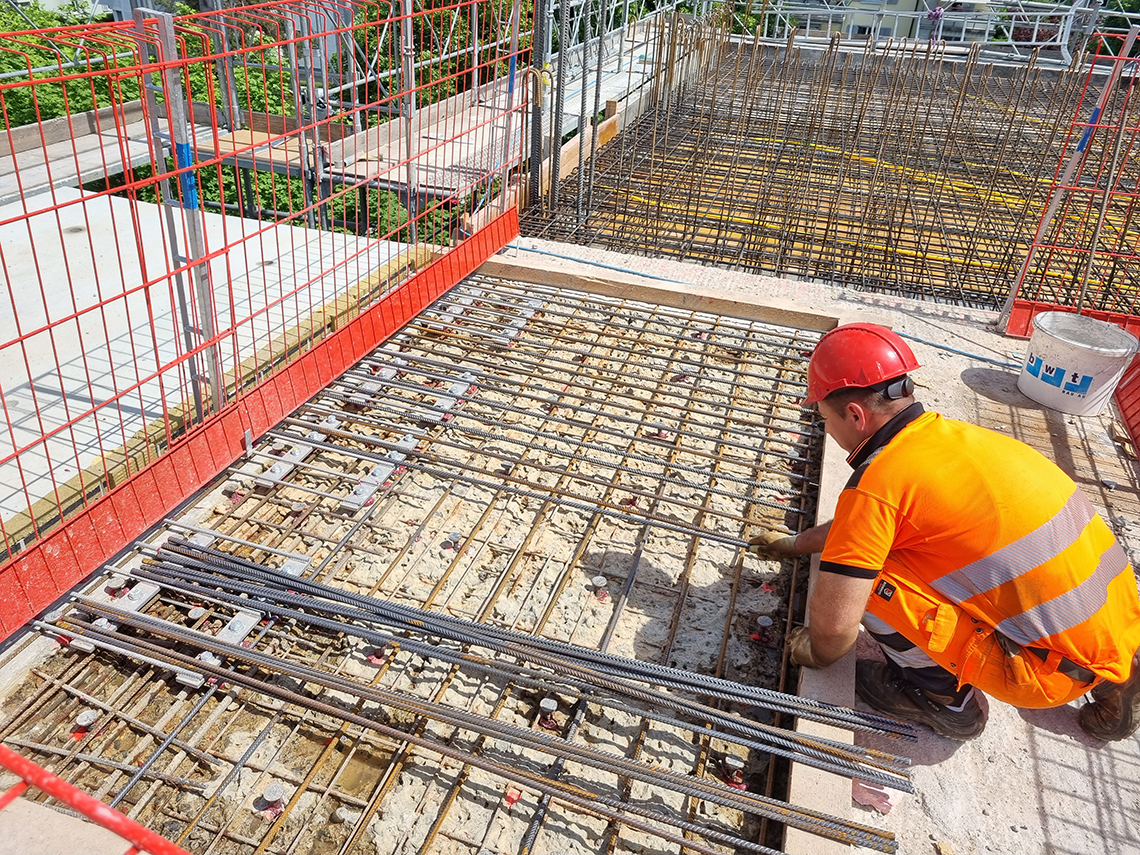 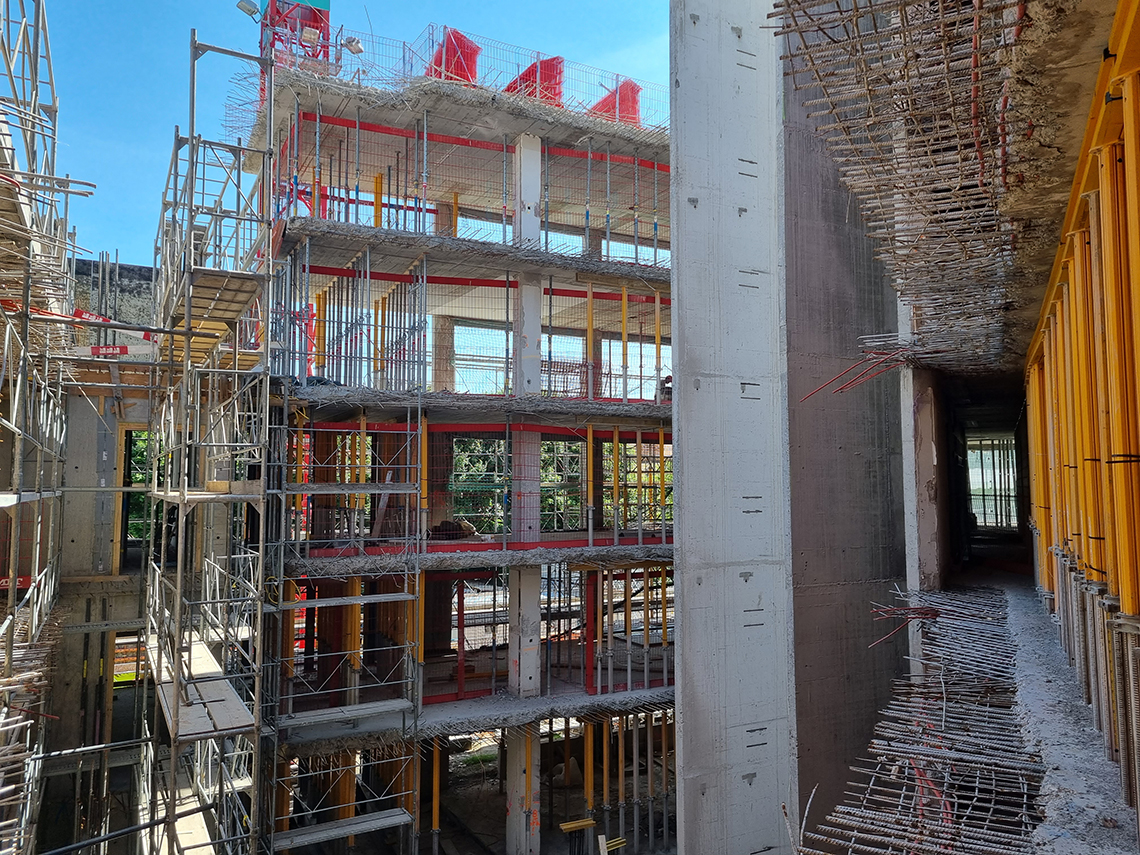 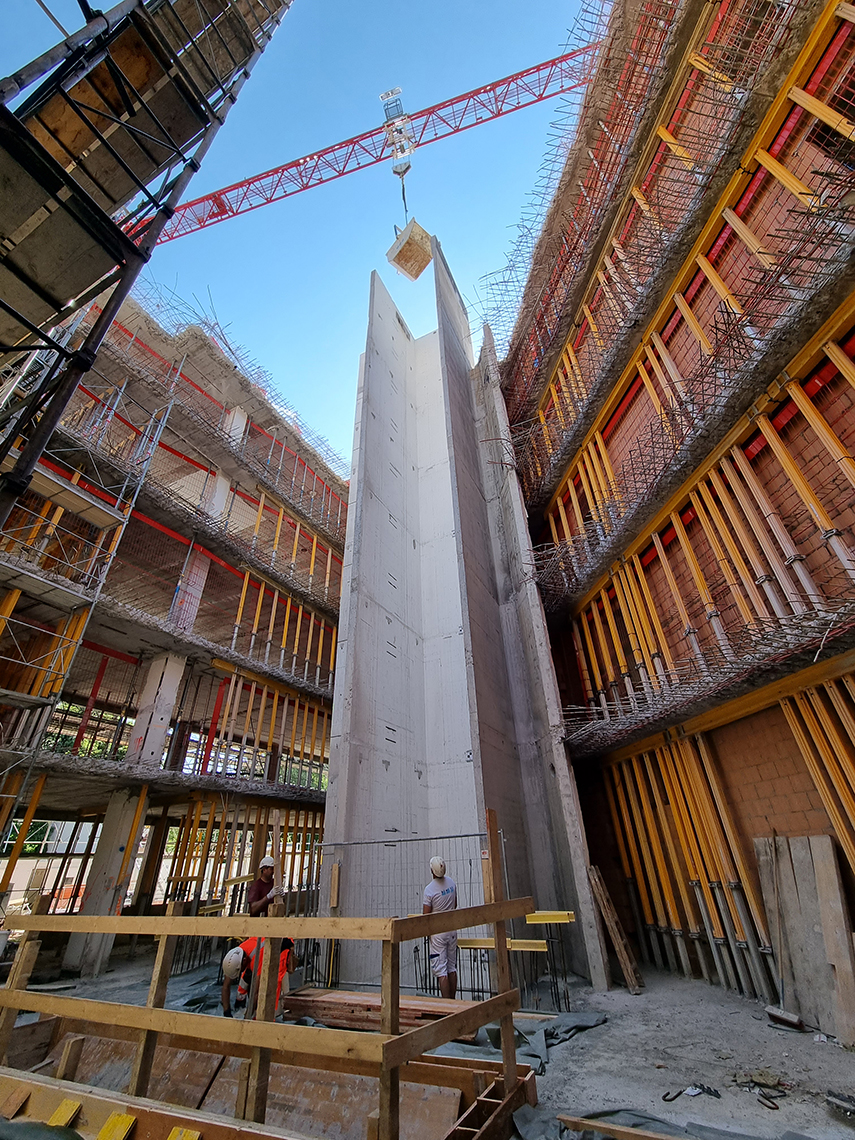 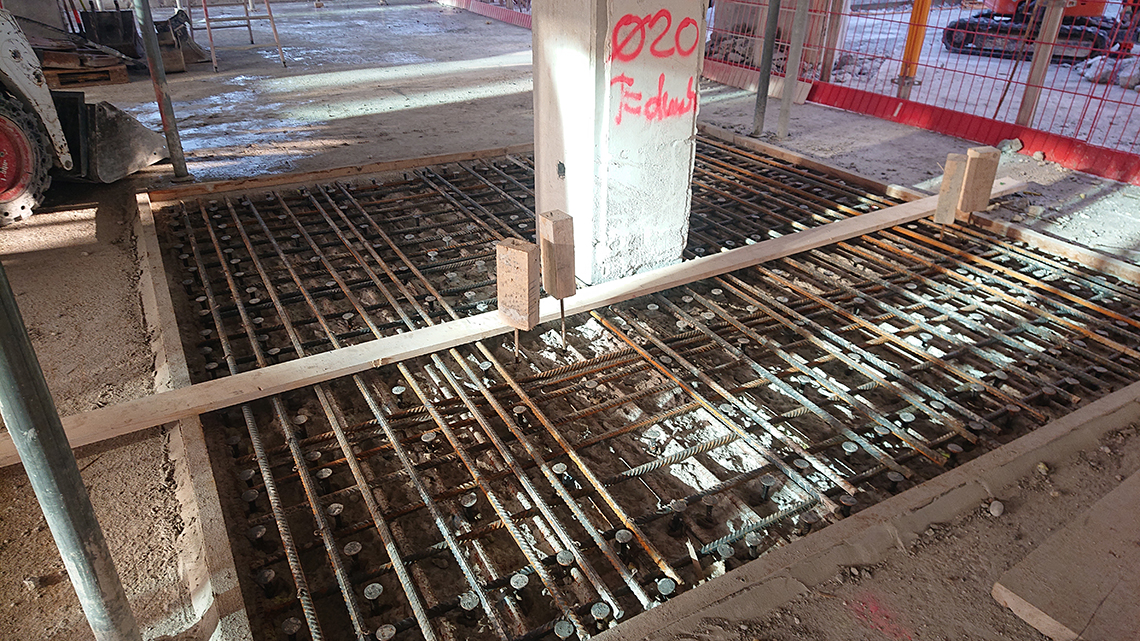 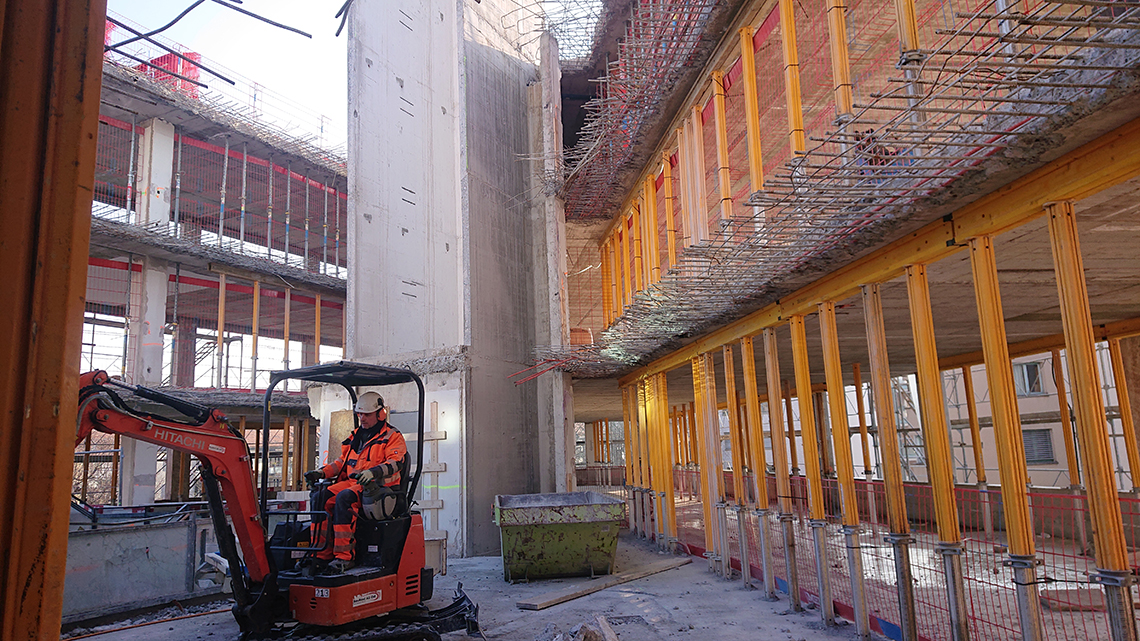 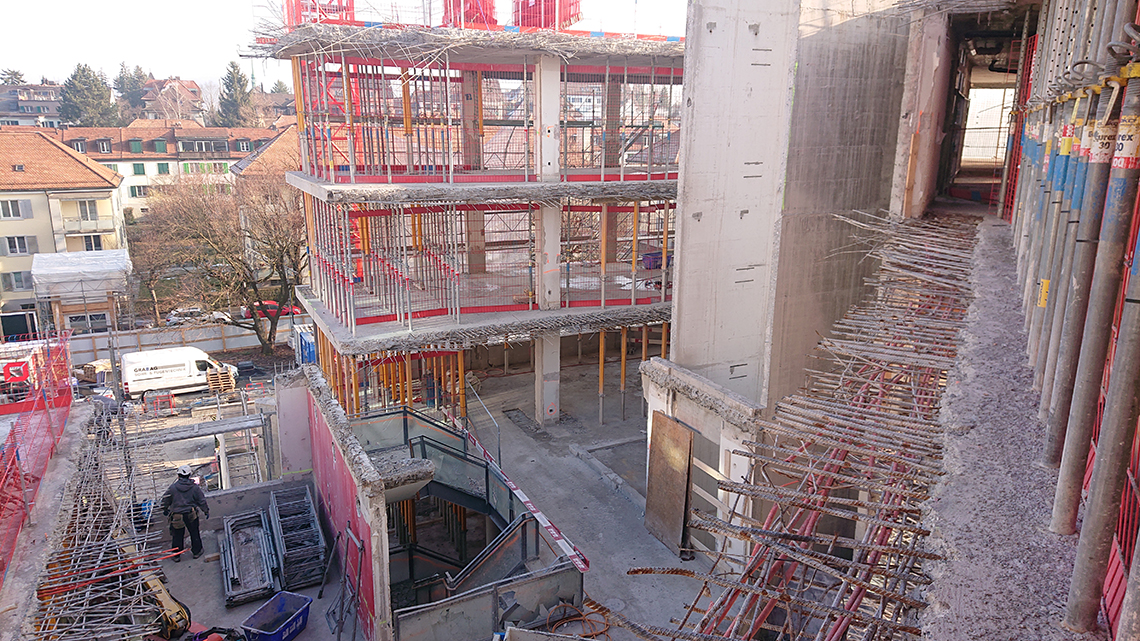 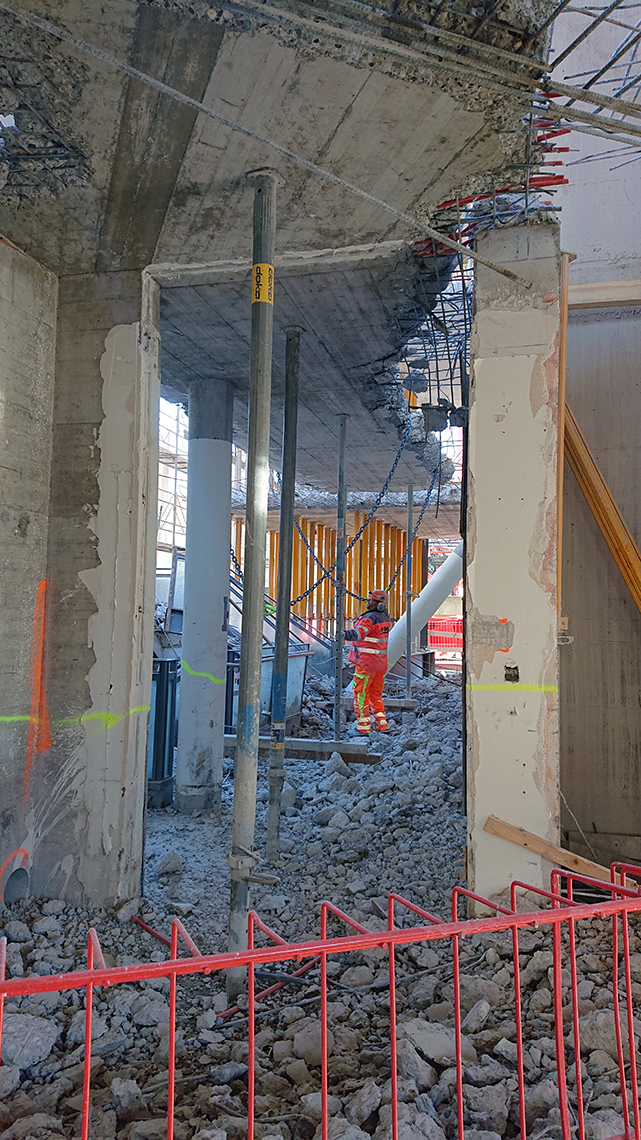 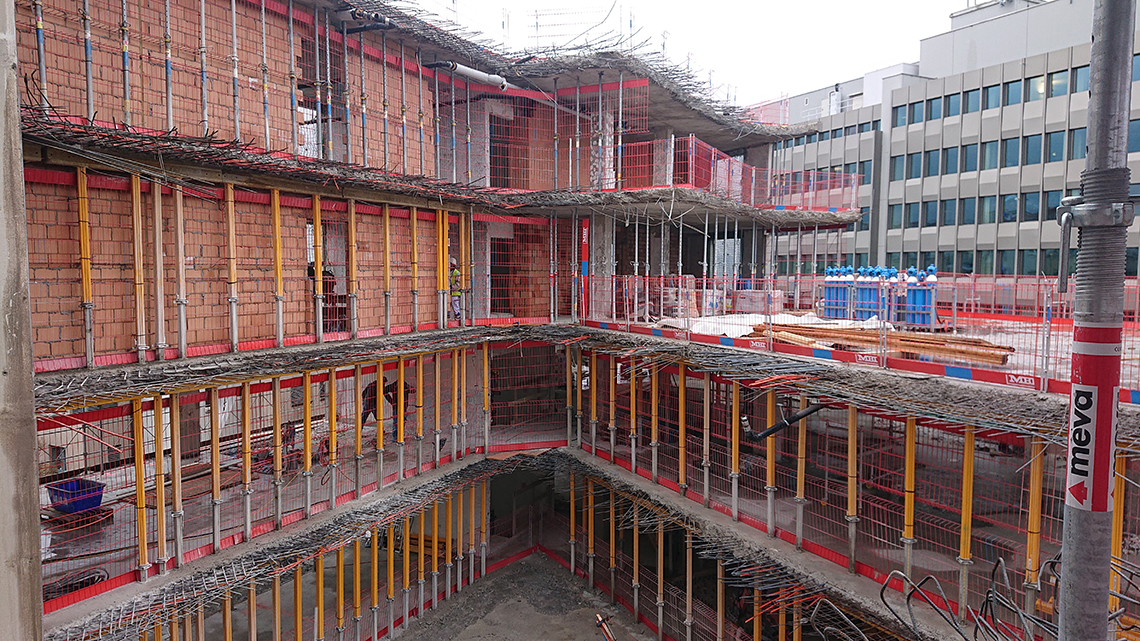 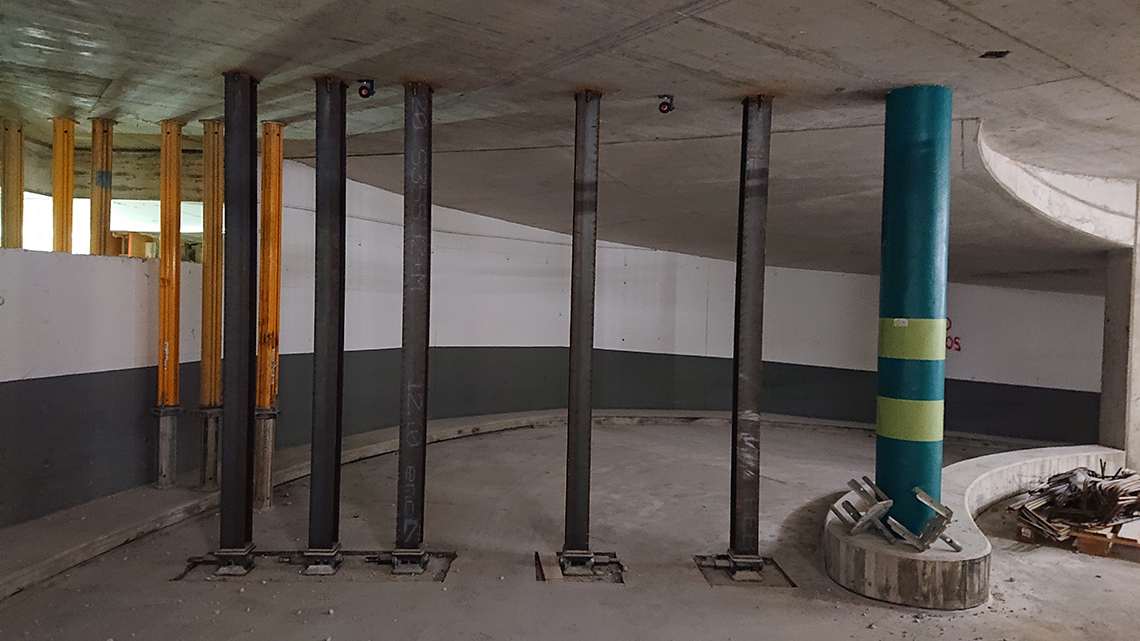 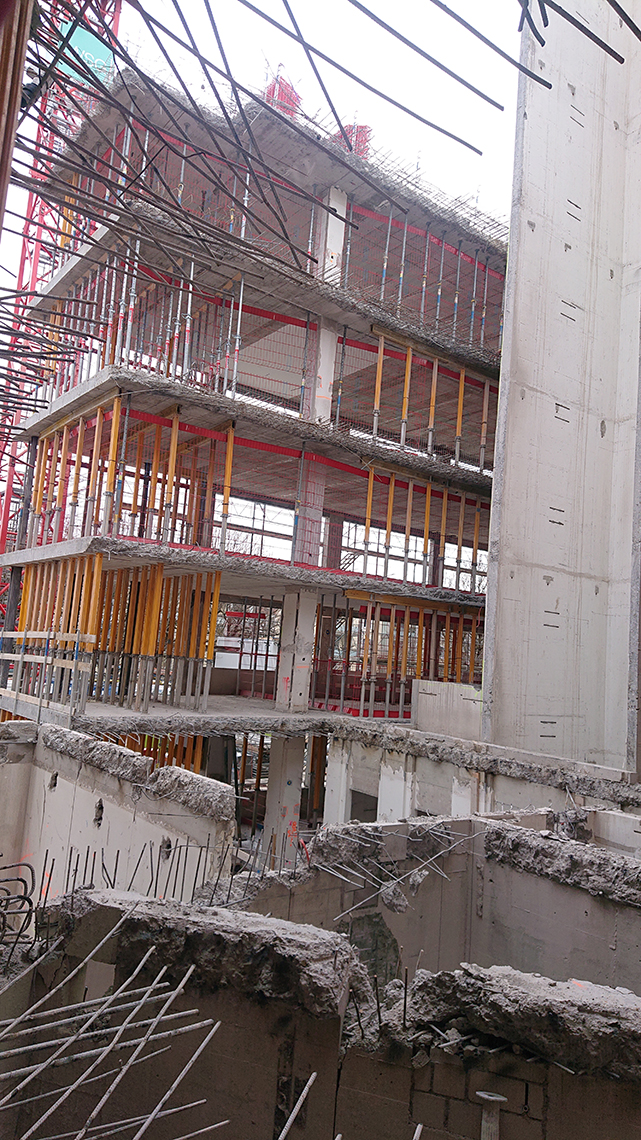 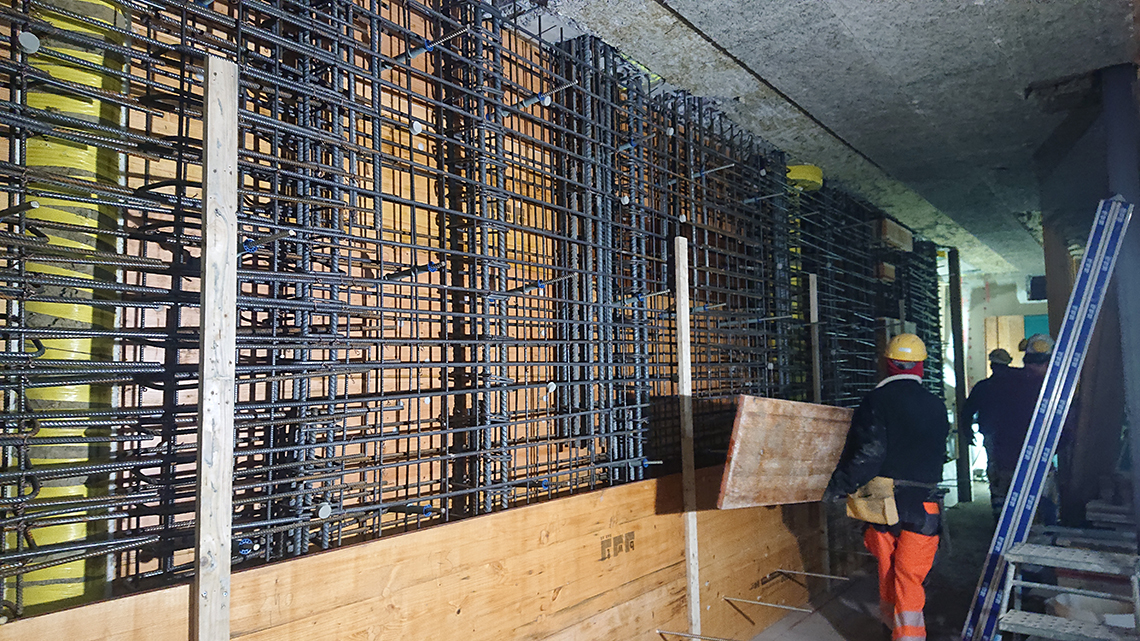 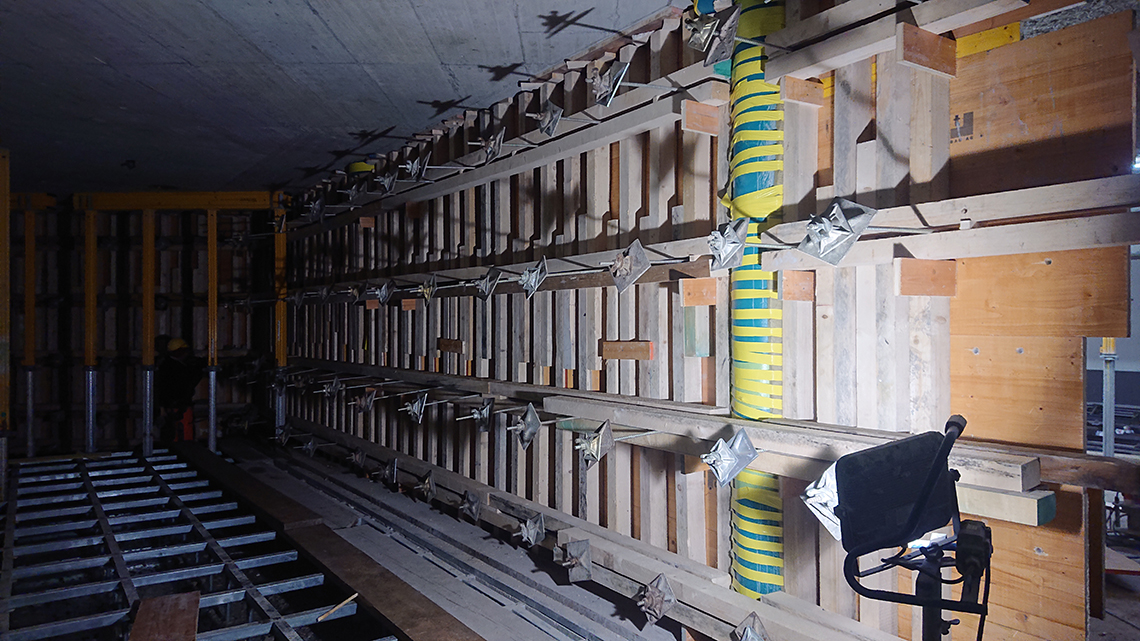 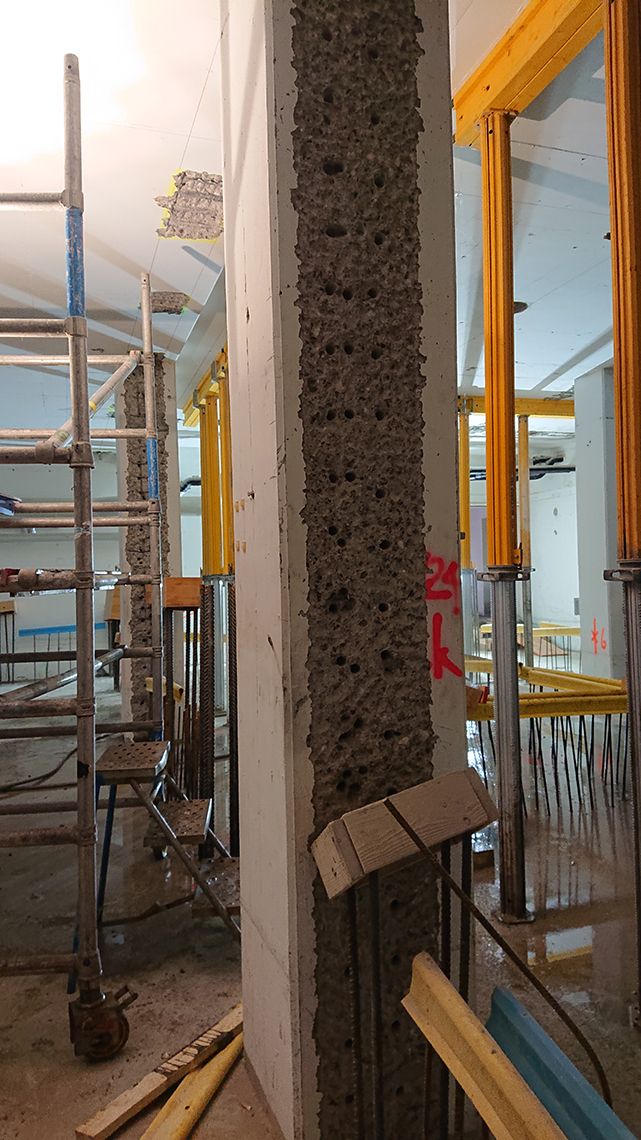 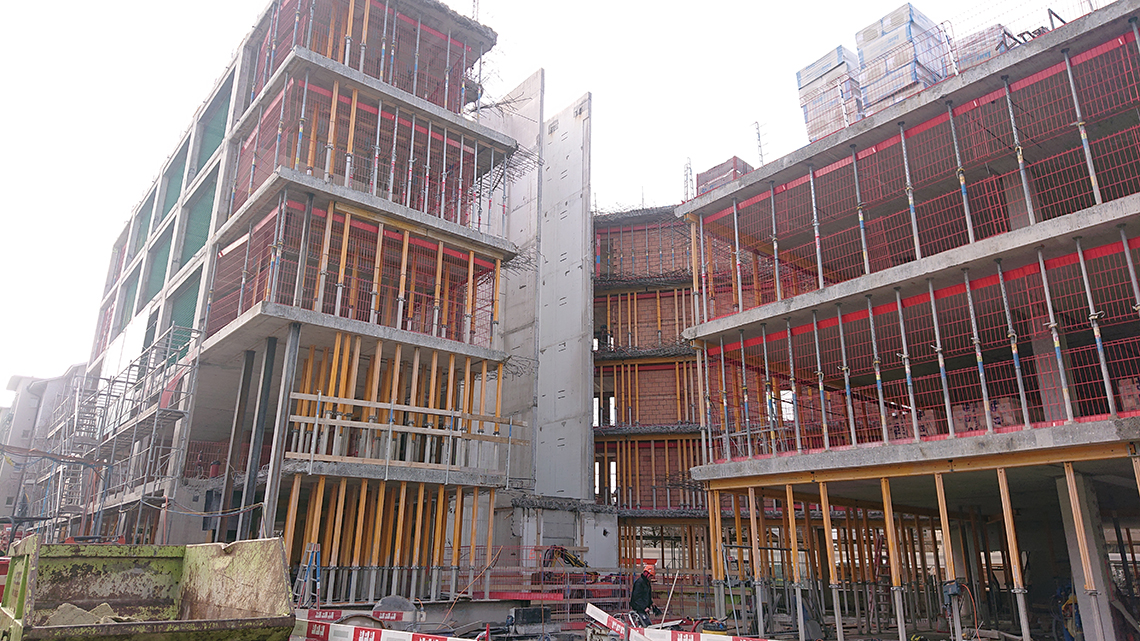 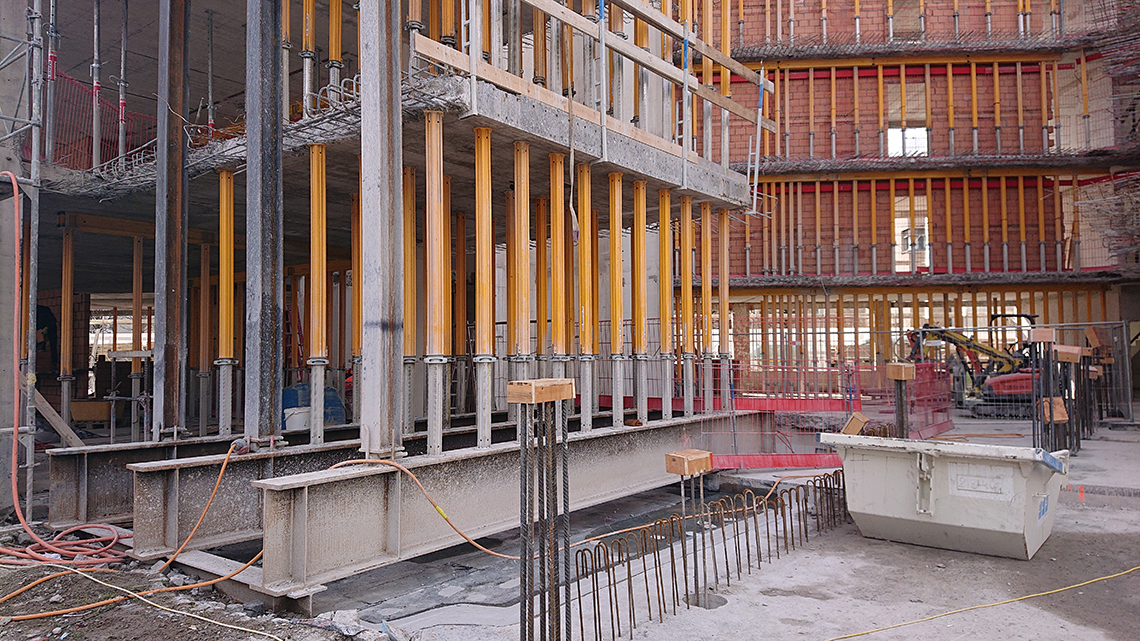 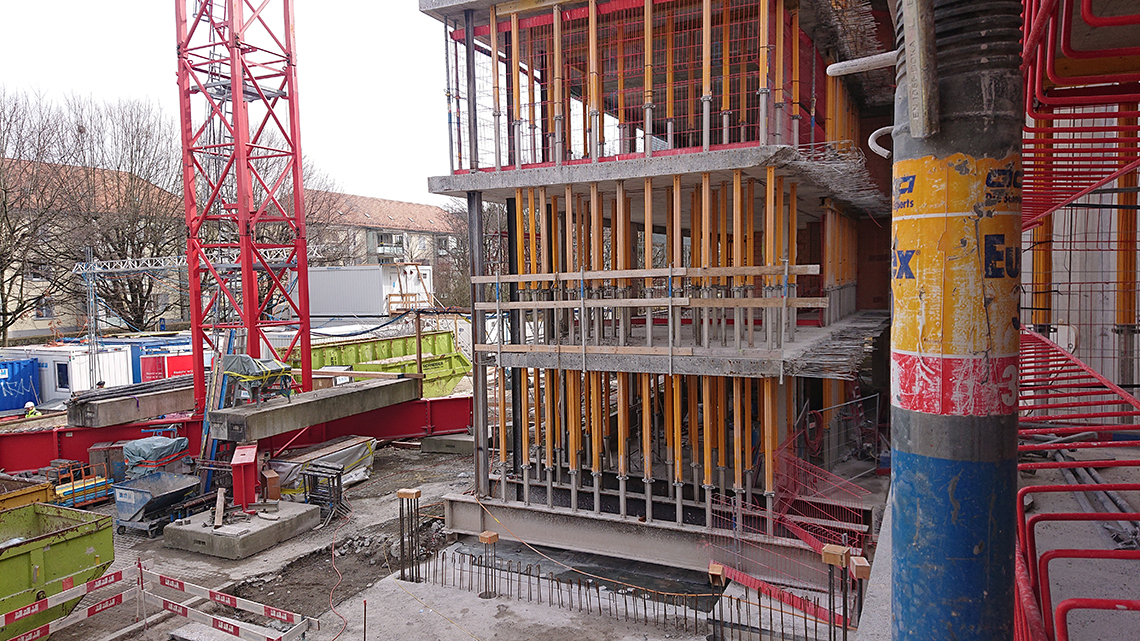 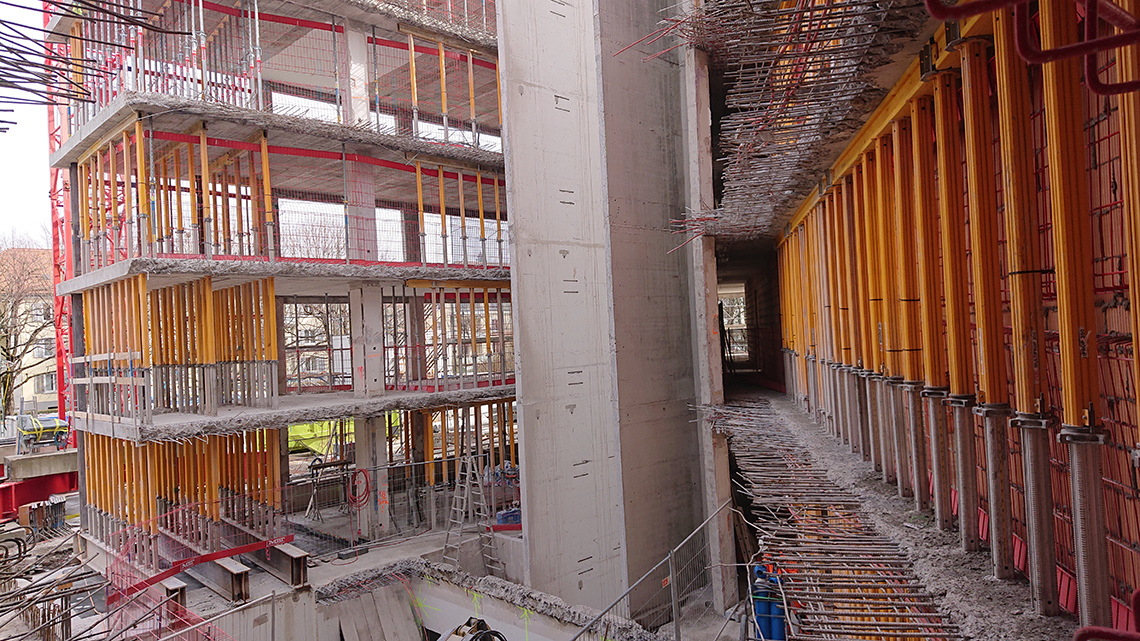 The existing property “Im Tiergarten 7” in Zurich (built in 1990), which was used as a laboratory building with a parking garage, is to be converted to purely residential use. The existing building with 3 basement floors, 5 upper floors and an attic is designed as a classical skeleton structure. The projected supporting structure mainly consists of cast-in-place concrete floors and walls as well as prefabricated columns and parapets. Furthermore, round solid steel sections were used as columns in the basement floors. The attic consists of a steel structure with Holorib composite ceilings.

In the course of the conversion, the usable floor space is to be maximized. For this purpose, the floor areas from the ground floor to the 4th floor will be expanded. The top floor will be completely removed and replaced by a attic floor in steel-concrete composite construction. The concrete ceiling will be constructed using semi-precast elements. The column grid does not correspond to the load-bearing elements of the lower floors. The loads have to be supported by the 4th floor slab.
Finally, new balconies will be built on each floor and floor-to-ceiling window fronts will be created. Any cutting of the edge parapets will impair the load-bearing effect of the existing edge beams. For this reason, the edge parapets will be replaced by new edge beams under the corresponding slabs.
The additional loads of the extension as well as the updating of the technical standards in the meantime require a reinforcement of the existing structure including the foundation. For example, punching shear reinforcements of the slabs, shear reinforcements of the interception girders and reinforcements of the bending resistances of the slabs will be necessary. Since large parts of the stiffening core will also be demolished due to usage, new stiffening elements will have to be integrated into the structure. For this purpose, new walls and cores will be built in reinforced concrete. These are planned primarily in the expanded area and in the area of the ceiling demolitions.
The staircases in the atrium are planned as wide-span prefabricated elements that are decoupled from the shell structure by means of custom-made acoustic separating bearings. 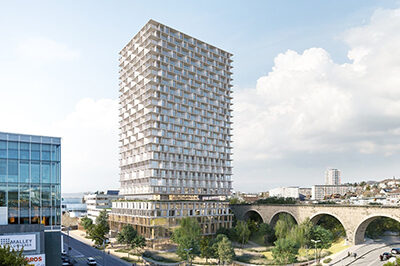 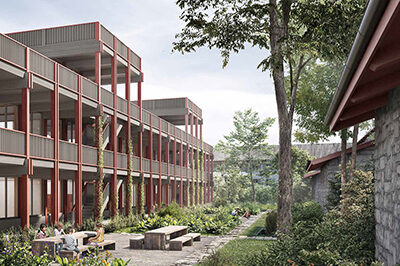 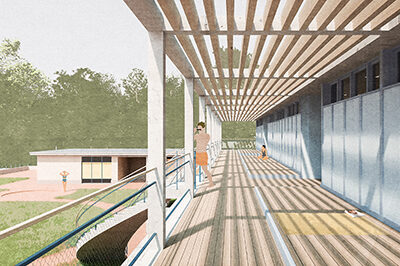 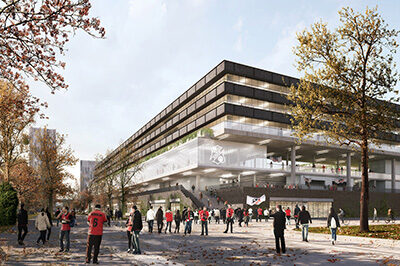