As a subproject of the Zurich cross-city link, the staircase Europaallee (formerly staircase Shilpost) will be enlarged and newly oriented toward the future Europaplatz. The following parts have to be roofed: the new staircase, the upstream furnishing and the platform between the end of the present casement-roof and the planned high-rise building in construction field B. On the one hand the planned roof is a 29m long extension of the platform-roof of track 3 and on the other hand an expansion of the same roof towards Europaplatz. It stretches into eastern direction as far as Kasernenstrasse, where the taxi ranks are located.

The steel construction should essentially resume the structure of the existing platform-roofs. The profil sizes are held in a similar range and therefore a structure as light-weighted as possible is being created. In analogy to the existing roof, both of the supporting directions will be constructed with a framework of steel laying parallel and orthogonally to the track axis. Exceptions are the outermost cross beams, which are built as plate girder. Solely the longitudinal beam along track 4 is constructed as a Vierendeel-girder. Together the girders form an efficient grid-system which absorbs the forces bidirectional. The roof enhancement has a structural overlap with the existing roof on the eastern side so that local structural adjustments become necessary. The spatial supporting girder grid along track 4 is supported by two consoles, which are mounted on the existing frame girder. On the side of track 3 the construction is carried by 8 composite supports. 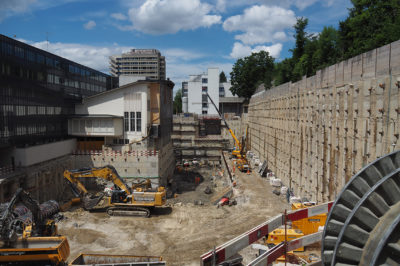 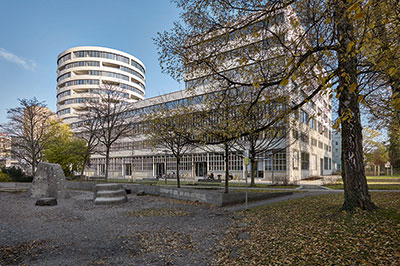